Recently at Complaints HQ, this happened:

This (shockingly expensive, but more on that later) collection of hardware represents state of the art(ish) across the 3 major platforms today.  So with this amount of alternate reality insanity in one place, what else is there to do but… Have fun playing games?  No!  Stage a platform VR shootout?  Yes!  Without further ado, let’s head for the main event!  Mobile vs Platform vs PC… Fight! 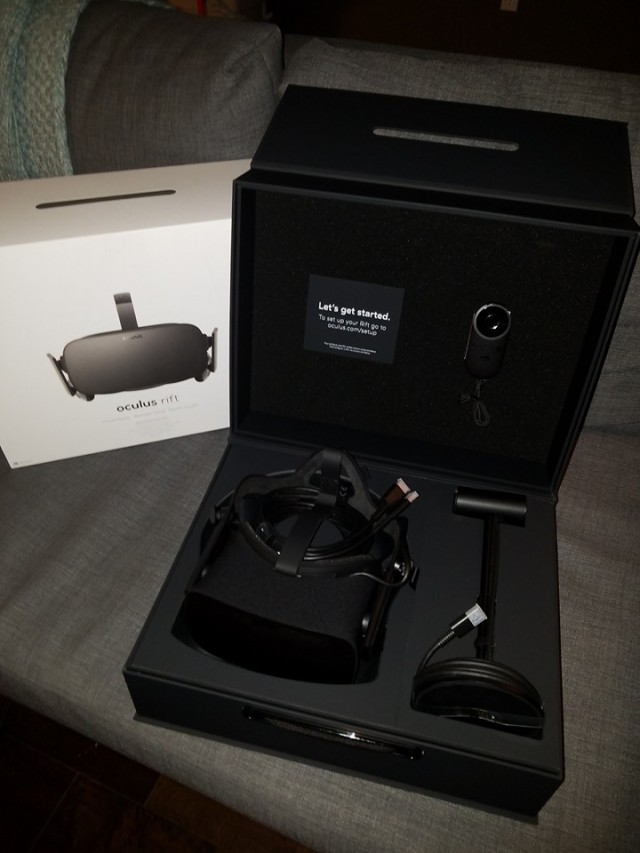 After unpacking all of the bits (headset, remote, sensor (which looks like a table top microphone actually), XBox One controller with wireless adapter, and assorted cabling), it’s a pretty simple process to physically connect. The headset connects to HDMI out on the GPU and also takes up a USB port, the sensor takes up a USB port of its own and should be placed on a level surface about 3 – 5 feet from where you will sit (or stand) to play, and the XBox controller wireless adapter takes up a final USB port. With physical connectivity out of the way, it’s just a matter of downloading the Oculus software and running the initial install, config and calibration. Oculus has its own app store integrated with the control panel app (which slickly autostarts when the headset is worn), but SteamVR now recognizes and supports the Oculus as well. My setup is the Alienware M15X R3 with a Pascal Titan X in the AGA (Alienware Graphics Amp, external GPU chassis). The AGA isn’t Thunderbolt, but instead is an external PCIE 3.0 x4 (32Gb/s) connection. Performance is amazing in everything with that setup and VR is no exception. There isn’t much the Titan X can’t handle. GeForce experience recognizes the AGA and Titan X combo correctly, but incorrectly reports that the system isn’t VR ready. This doesn’t matter since everything works great, but is one of those annoying PC things (like having to update drivers and firmware on like 20 devices constantly in addition to the games themselves and the base OS)
The setup was actually quite easy by PC standards and calibration was a breeze. The Rift sensor has an amazing return on effort in that it is extremely easy to place and use, but the accuracy is excellent. No motion controllers yet (coming in Dec), so control is by way of the XBox One pad which is the same as it’s always been in this setup. 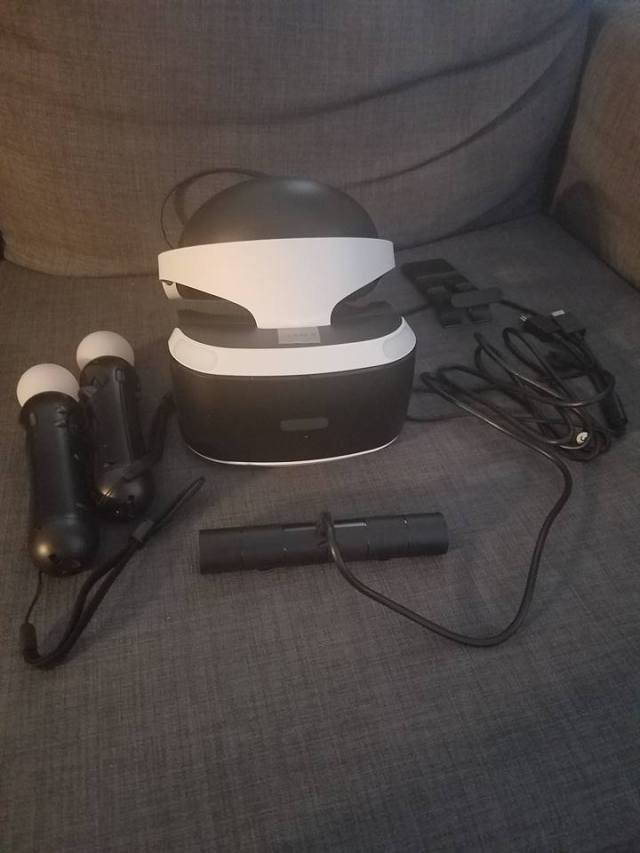 Like the Oculus, there is a lot to unpack here (literally).   At first glance, it’s clear there are even more bits in the console pack than the PC.  This comes actually as a bit of a shock.  The PS VR needs its own power supply, as well as the obligatory USB and HDMI hookups.  The headset has a dual proprietary data/power+ standard HDMI cable with an inline remote (2.5mm headphone jack for the included “3D audio” ear buds, volume, power, focus controls) that lead to a breakout box.  The breakout box is pretty sizeable, but can sit on top of the PS4 (occupying most of the left side) and is an HDMI passthrough.

The HDMI connection heading from the PS4 to the TV shifts over to the breakout box TV out, and the HDMI “to PS4” port on the breakout box, shockingly, goes to the PS4.  The next bit is the micro-USB connection which goes from the back of the breakout box to the front of the PS4.  The final connection is the power brick which also connects to the back of the breakout box.  All in all, it’s pretty straightforward and intuitive to hook up, but definitely something of a birds nest and more cumbersome than the PC.  Moving on to the sensor, things don’t really improve much.  The sensor is the old PS4 camera which, while easy enough to setup, is less flexible in terms of placement strategy than the Rift sensor.  The last bit is the movement controllers which are literally the old PS3 mov hand helds.  These are probably the weakest link.  Setup is as easy as adding a new device and calibrating them with the camera, but again, this makes the whole thing more placement constrained.  Not as bad as the Vive mind you, but much less flexible than the Rift.  Once everything is physically connected, and the PS4 is powered on, the headset gets powered on and immediately needs an update.  When it comes to system, game, and peripheral updates consoles are definitely nearly caught up with the PC.  The overall software installation between the two was pretty much a wash in terms of time required for both the install itself and calibration.  The calibration of the headset and controllers with the PS4 camera is less confidence inspiring than the Rift sensor, but it remains to be seen if this will impact gaming (hint – it does). 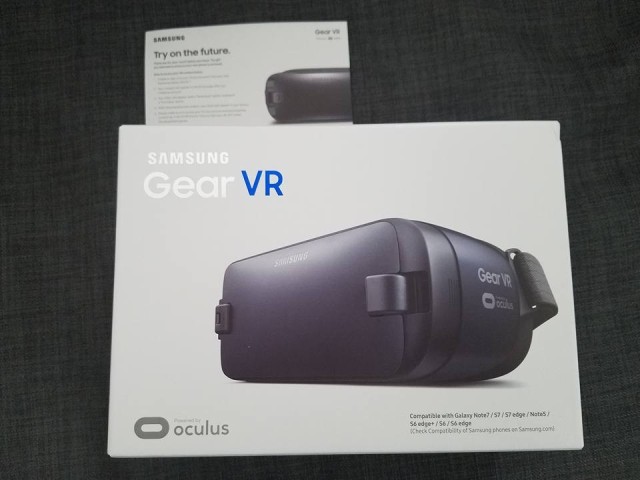 Right from the moment of unboxing, it’s clear that this rig is a much simpler proposition.  The baby Oculus is not only physically smaller, but it is a much less complicated package with no sensors to be found, and no wires or cabling.  Maybe even too simple in that it doesn’t even provide an in headset (like it’s big brother) or even in box (like the PS VR) audio solution.  That said, every phone has a 2.5mm headphone jack and everyone has headphones, so it isn’t a huge issue.  Given that the headset has no built in screen, and there is no HDMI in this install process.  Instead, the phone itself becomes the screen.  This is a bit odd, but it works.   Since the phone is the screen, the software for VR needs to be installed before fitting it into the headset.  This is a typical Android app install and is quick. The lens cover that protects the visor snaps off by pulling the clamp to the right, and then the phone slots in, docking with the micro-USB port (adapters for USB-C are included) and then snapping in, held in place by sliding the clamp back.  Once the phone is in place, the visor can be worn and the software will auto launch.  Calibration is extremely easy since the entire thing is self contained and movement is tracked by the phones gyroscopic sensor.   Of the 3 units, the installation here is definitely the easiest by far, despite the somewhat strange move of having to dock the phone into it.  The fact that there is no real calibration only adds to this.

WINNER: I’m going to call this one a victory for the GearVR.  Remember, we’re just talking setup and OOBE here.  The Rift takes second and, in a major upset, pushes the PS4 VR to last!  Next up… Gaming!