Let’s kick off the gaming tests with the oldie but a goody trainwreck that is Metro 2033.  In this case Last Light and Redux.  Settings are PhysX off as always since it has remained bugged since inception and everything else maxed (note – SSAA is on): 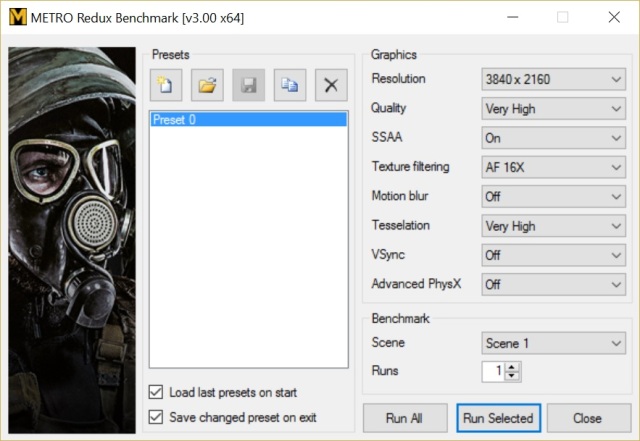 The same benchmark code and settings are used for both games and only the scenes played back differ since they share an engine.  First up is the old original Metro 2033 bench run through:

As an average, we end up with 54fps and a minimum of 19fps.  Minimum is a bit low, and still not hitting the magic 60fps (maybe Volta SLI?), but amazing that we’re finally within striking distance with SSAA on.

OK, so how about the Last Light scene? 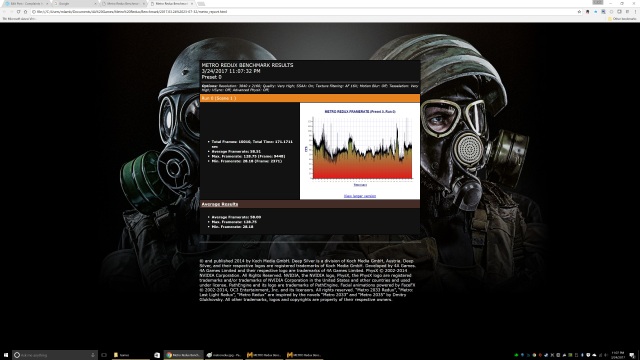 Argh! So close, yet so far.  A good 10% better than the train tunnel, but still a few frames shy of 60 at a 58fps average.  Minimums are up to a health 28fps though, which is amazing by Metro standards.  It should be noted that actual game play is perfectly smooth with no hitching or dropouts.    Metro will always be a love/hate proposition.  I love that they included this benchmark and that it has stayed relevant since way back in the GTX480 days, but I hate the fact that the game engine itself clearly has inherent optimization issues that were never sorted.  Still, it’s fantastic for comparing relative performance across generations and there we can see the huge progress that has been made in the (admittedly long) 7 years from the 480 era to today.  Still, it would be nice if $4000 in gear could push this damn game to 60 at 4k max!