I like to play a lot of indie games.  While of course hit or miss, by and large the bang for the buck on these is amazing.  Plus it’s cool to support small studios who are able to take risks and bring you experiences that would never pass the business plan review stage at a AAA shop.  When it comes to Live streaming, though, this is a bit of an under served niche.  Live streaming has become a legitimate phenomenon and an actual new estate of entertainment, which is awesome, but most of the content centers on big releases for obvious reasons.  I figured at the nexus of these two realities might lie a good science project and an even better way to waste money!  Thus, “Project Live Stream” was born and I learned ultimately that this is not such an easy space!

Let’s kick things off with an architecture view (skip to the finish product basically): 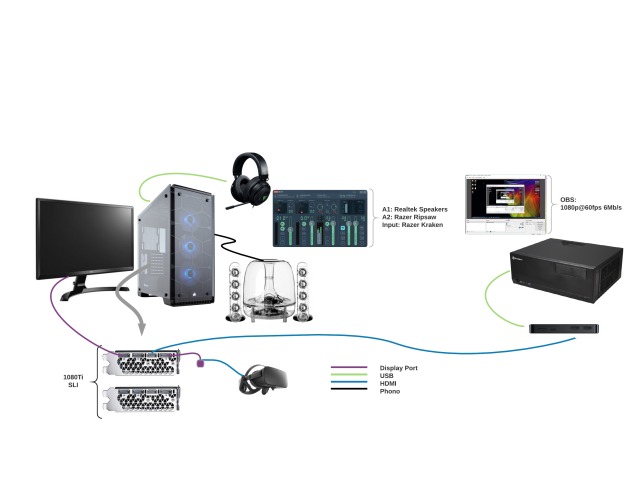 Ok so there is a lot going on there.  To start with, I decided on a few rules up front for no particularly great reason:

So with the rules of engagement in place, I set out to pick up some components.  For a refresher, this is the PC setup currently in play at Complaints HQ:

For the USB capture device, I found myself torn between two tough contenders: the Razer Ripsaw (AVerMedia LGX OEM), and the Elgato HD60S.  These parts are pretty close, and the “forum drone reflex” is to repeat Elgato like a mantra.  Looking closer though, most reviews give the nod to the Ripsaw and, ironically, many forum drones also give the nod to the AverMedia LGX (being either unaware the Ripsaw is that same part or taking exception to Razer or Razer software).  The main issue pro reviewers had with the Ripsaw was that it was ridiculously expensive.  Fast forward a year though and the two parts are the same price (about $180).  Given I had an Elgato in the past, like the design of the Ripsaw, and it did seem to take the uncompressed quality edge in reviews, I went with the Razer.

If these sections had subheadings, the subheading for this one would be “Setup – A Tale of Woe”.  I learned a bunch of things up front that challenges my initial assumptions and are worth noting:

In addition to the above settings, all channels should be toggled on for the virtual  inputs so that the virtual wire will utilize all physical channels for output and will also enable “listen” for the physical input.  I left all channels in normal mode which worked fine (none set to mix down or composite)

It was a bit of a complicated journey, but this setup results in everything just about working with only a few minor inconveniences.  Having to switch monitor config and resolution before every stream is definitely a pain but the audio mixer does a good job and is unobtrusive and it is definitely cool when speakers, headset and the stream are all active along with voice capture.

With the source side setup, it was time to move on to the capture side of the equation.  After trying a number of different solutions, I decided to stick with OBS Studio.  It’s open source, free obviously, and extremely powerful.  It also has great support for both software encoding (H.264 via the x264 CODEC) and hardware (Nvidia NVENC) for both recording and streaming.  The software defaulted to NVENC and the Titan X, but with 10 2.2Ghz cores I decided H.264 was the better choice.