So IBM recently made an extremely significant breakthrough in AI research in that they were able to algorithmically simulate the brain functions of a cat.  It’s amazing how ignored a story like this is by the mainstream press and how badly the average person underestimates its importance.  If artificial sentience is one day achieved, historians will look back and point to this IBM accomplishment as a vital first milestone on the path.
The whole thing got me thinking on the ramifications of continued breakthroughs in this field.  What questions would potentially be answered about the nature of sentience?  What new ones would be raised?  Would achieving machine sentience disprove the possibility of some aspect of existence and intelligence beyond the physical or would it actually do the opposite and provide the evidence that had always eluded scientists and philosophers both?
Human experience has yet to quantify what “existence” and “sentience” really mean.  Religions attempt to provide an answer by way of a largely emotion based and abstract view including the notion of a “soul” and persistence of that soul beyond physical death.  Science obviously takes a purely rational approach, even in speculation, and has yet to draw any conclusions beyond thought being the outcome of a complex series of electro-chemical reactions in the brain.
It is ironic that ultimately, the answers may lie not in biology or philiosophy, but rather in computer science and a tangentially related field – theoretical quantum physics.  For anyone not versed, theoretical physics deals with the study of the composition of the universe beyond what we believe we have quantified.  These days, it is widely accepted that the universe is composed of at least 10 dimensions (or 11, depending on which unifying theory you subscribe to).  It is also accepted that you cannot have perspective up.  What does this mean?  The easiest way to understand is to imagine a hypothetical 2D life form.  So imagine, if you would, that Bart Simpson were alive.  One day, while lying flat as always, a lovely oak tree somehow lands in Bart’s two dimensional field of vision.  What does Bart see? 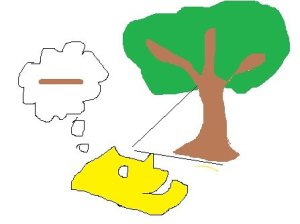 Well… The accepted theory is, “not much”.  Bart, as a 2D life form, would only be able to see the aspect of the 3D object (the tree) that touches 2D space.  In other words, he’d probably see something that looks like a bark colored line the width of an oak.  It’s tough being 2D in a 3D universe!  Now try being 3D in a 10 or 11D universe!  That’s a state we’re all pretty familiar with, even if we can’t perceive it.
“Time” is often referred to as the “fourth” dimension.  Not a spatial, dimension (at least in the traditional way that we, from our 3D myopia, define “spatial”) but a dimension nontheless.   An objects “position in time” is as fundamental as its physical characteristics.  This relationship between time and space is the core principal of Einstein’s relativity theories.
If you’ve followed along this far without nodding off, reward yourself with a refreshing beverage because from here forward, we are about to diverge into some wild flights of speculative fancy!  Well maybe not so wild in the generally accepted social sense, but wild as far as geek chat goes.
Let’s make the assumption that the idea of relative perspective and upward perception limit is accurate (Bart can’t see the tree for what it really is) and that time is, in fact, dimension number four.  This would mean that time is a limiting factor on our ability to perceive the universe.  And this seems correct.  We are linear beings who are bound by time.  It is difficult for us to even speculate on concepts that are non-linear, much less be able to “move” outside the boundaries of time.
In order to “work”, however, theoretical physics models all require the existance of dimensions beyond the fourth mathematically (again, 10 or even 11) depending on the model.  We have theorized, and now even directly observed, that particles are the building blocks of reality.  Quarks become protons and neutrons.  Protons and neutrons combine and attract electrons and together they form atoms which combine to form molecules and so on until you have a bouncing baby human.  This all sounds fantastic and we could all live happily ever after (for as long as our linear existence allows) except for a few small problems.  Chief among them is that particles occasionally misbehave.  They do strange things like “entangle” (Google it!) which seem to violate relativity.   Other minor challenges include the fact that there appears to be “missing mass” in the universe, the elusive nature of gravity and the difficulty of rationalizing quantum mechanics with relativity.
Investigation into these formidable quandries has resulted in a number of emerging theoretical models.  One of them in particular, string theory, is of relevance to this discussion.  Dumbed way, way down, string theory posits that the particles that serve as the building blocks of our universe are, in fact, points at the end of a line which oscillates its way through space time.  So what would a photon, for example, really look like if what we observe is really just the view of it allowed by the perspective lock imposed by our third dimensional vantage point?  Well something like this possibly: 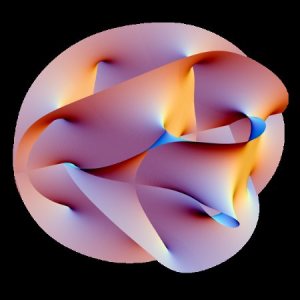 Pretty crazy.  But much like Bart looking at the tree, its quite difficult to “visualize” an Nth dimensional structure from a three dimensional vantage point!
So what does all of this have to do with sentience, AI, the nature of existence and the price of tea in China?  Well who knows!  But seriously, if we accept that we are genuinely the sum of our parts and that everything which occurs at a quantum level has some measurable effect at a physical level (and this is directly observable in many cases, one example being how quantum mechanics has influenced biologists’ understanding of smell receptors), then it stands to reason that in theorizing on the nature of sentience and thought, we allow for the possibilities afforded by emerging quantum mechanics theories.
And this brings us to the most critically important emerging theory when it comes to formulating an understanding of what we are; the theory of phyiscal information. The concept of physical information allows for the possibility that information exists as a physical entity.  This theory is tremendously important in quantum computing and may actually be directly observable when we measure the actions of those pesky entangled particles mentioned earlier (did you Google it?)
So if five hundred years from now, IBM (yes, they’ll still be around innovating despite what some people say!) builds a quantum computer which simulates the human brain (or surpasses it) and gains sentience, will they have disproved the possibility of a soul?  Or will they have simply demonstrated exactly how a “soul” is created?  In all likelihood, it will depend on how we choose to define the term.  Perhaps a “soul” is merely the emergence of a pattern of information cohesive enough that it forms an autonomous entity.  It might stand to reason that this entity spans the N dimensions of space time at a quantum level.  Perhaps the universe might even choose to persist this information beyond the physical reaction that lead to its emergence (be it biological or mechanical).   Could it be that an afterlife awaits as an algorithm rattling around in the eternal computer that is the multiverse?  One day I suppose we all get to find out and, some time long after that if you’re reading this, science may prove and observe it.
Advertisement