Onward ho!  With the parts all on hand, it was time to dive into some hardware assembly.  Antiseptic swabs on hand for the inevitable lacerations, and anti-static straps thrown aside with the disdain of a “seat of the pants’er”, the subject is brought to the bench (also known as “the wifes desk” which “better be clear before morning!”)  No pressure right?  So here is the unboxing shot: 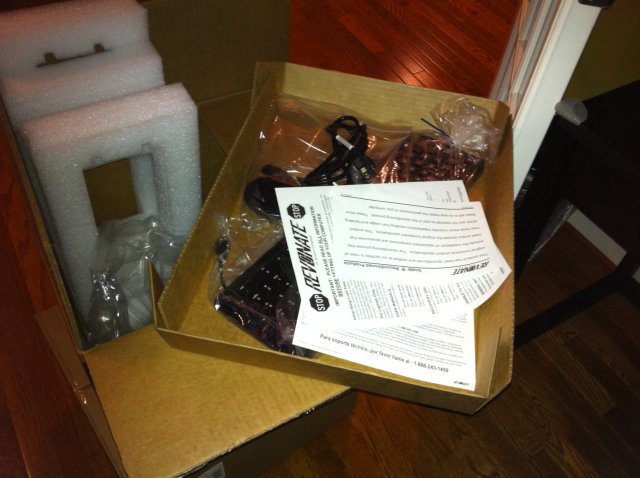 It is clear right off the bat that all expenses were spared on the refurb process; which is just fine!  Packaging, disks, manuals et all would all just be going in the bin anyhow.  What we have is a few pages indicating that yep, this is a refurb so good luck, a plastic baggy with the keyboard, mouse and power cord, and the unit itself:

Not a bad looking unit!  It never fails to impress me how far PC’s have come.  I remember when the typical PC case was an 80 pound beige monstrosity.  The latest generation of slimlines are really nicely cabled, very small, and pretty decent looking all around.  Glossy for the best possible finger print transfer, but nicely rounded with flat black metals and good build quality.  Two thumb screws on the back are all that is needed to open er’ up.

With the unit open, two things become immediately apparent; the aforementioned clean cabling job is clearly in evidence and the ubiquitous “mystery screw” has presented itself!  Hats off to the refurb team…  That little rattle I noticed moving the case onto the desk was indeed an oddly misplaced screw.  Where does it go?  Who knows!  Not wanting to anger the IT gods, I set the mystery screw aside, figure that odds are it won’t matter much, and forge ahead!

Next step is the memory upgrade and as can be seen from the shot above, the RAM, while partially accessible, is largely blocked by the disk enclosure, so out it must come!  This is where a video would be pretty handy, but stop motion will have to do: 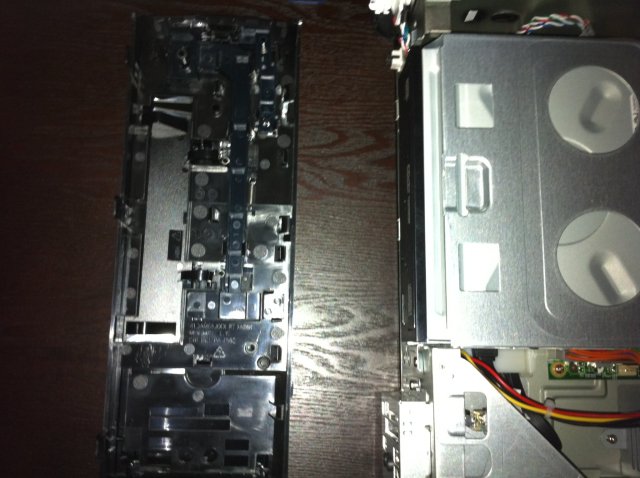 Three clips and the faceplate is off!

The faceplate is the first to go and comes off very easily with just three simple clips.  It is pretty solid when on, but effortless to remove.  Not bad!

Two small philips screws and a clip is all that holds the drive enclosure in place.  Once the screws are free, gently tilting forward while lifting upward pulls it straight out.  Fearing the worst, I maneuver the cage and find out that… YES!  Gateway was thoughtful enough to have anticipated this move and left enough slack that it is possible!  Kudos to the Gateway build team for not forcing a device disconnect when upgrading RAM.

With the cage out of the way, its time for some RAM swapping.  Eying the existing modules, I guess at the 1GB pair by the number of DRAM packages and lo and behold, I guess right!  Good thing we were careful not to anger the IT gods earlier with that mystery screw.  Out goes the old, and in goes the new:

Next up is the video card and I sense that my luck is running out.  This one was a gamble, but I wanted to push as far forward as I could in the ATI family (I have read reports of good success with DirectPath IO on ATI, but not so much on NVidia so even though I am a fire breathing tri-SLI wielding gamer, ATI it is!), while still being able to fit in a low profile SFF case.  The Sapphire box looked small, my connection was lousy and so 3G was slow making iPhone research painful, so I decided to wing it and go for the 5670 512MBer…

Dun dun duuuuuunnn!!! Houston, we have a problem!  My sixth sense was right and luck officially failed.  The 5670 is absolutely HUGE.  Much too big for anything short of a case that isnt really tiny.  Well, back in the box it goes for a return to Micro Center tomorrow.  In the meantime, video isn’t enough to stop the build, so we forge ahead!  On to the ESXi install!  Will luck return, or is the bad luck here to stay?  Tune into the next installment!

Supplemental build notes: Obviously the above was a rinse and repeat for the second SX2801.  Only two interesting things worth noting.  One, the power cord connector was oriented the other way in the second machine (“upside down” if you will), two the RAM in the second system was Kingston instead of Samsung.  Hurray for parts bins!