Dropping thousands on new PC gear often gets me thinking philosophically (especially with all of the quiet time during benchmark runs!)  It is easy to get caught up in the specification holy wars of AMD Excavator vs Ivy Bridge, Tahiti vs Kepler, etc.  and lose sight of just how far desktop computing power has come.  Reviewing the architecture of the GTX Titan really brought this point home.

Consider for a moment, the NVidia SMX, or Streaming Multiprocessor Next Generation.  This is the brains of the operation for the current Kepler generation of NVidia GPUs.  Here is a snapshot of the internal architecture of the GK110 SMX (GTX Titan variety): 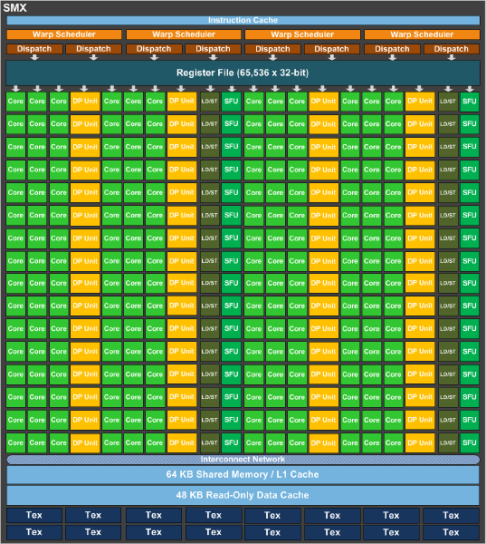 What an incredible piece of technology!  You essentially have an entire high performance computing grid on a single die with the SMX.  There are 192 CUDA cores (Compute Unified Device Architecture).  These are fully programmable, massively parallel, computing cores design to operate slowly and steadily on a huge number of threads (by contrast, fully general purpose architectures like Intel x86 feature core designs that are designed to work on a much smaller number of threads, but much more quickly).  The reason behind this architectural difference is very much tied to their intended purpose.  A general purpose CPU like an Intel x86 part is designed to run general operations.  Lots and lots of small blocks of instructions, with a ton of repetition, all of which are time sensitive and loosely interdependent, operating on small, disparate, sets of data.  For example, on a typical day you might have your email client up in a web browser, which continually opens network sockets and receives small amounts of data from the network interface triggering a minor UI update in a browser.  At the same time you might be working on creating a document in a productivity application which continually scans the keyboard and mouse for input, captures data from the user, responds to user requests interactively, and saves data to the storage system interface steadily.  In the background, the multi-tasking operating system is running and continually doing housekeeping which interacts with, and manages all of these interfaces (network, disk, IO) to keep the environment healthy.

Now consider the job of the GPU.  There is a massive amount of data (the flow of images to be rendered) and a well defined process with very sticky interdependency which operates on it (the 3D pipeline).  Any loss can stall the pipeline entirely which causes a high level of disruption in the user experience.  Smooth but slower, in other words, is better than faster but jerky.  A system like this requires lots of computing units that can take this predictable, and well defined, pattern and work on it in parallel as quickly (and consistently) as possible.

Looking at the diagram, you can see that in addition to the single, and double, precision floating point units, there are also SFU’s or “special function units” and “texture units”.  The texture units are directly responsible for the texture mapping phase of the 3D pipeline (where bitmapped image data is applied to a rendered 3D surface).  The “special function units” are directly responsible for “transcendental functions” or, basically, trigonometric math (sin, cos, tan, etc).  There are 32 of these SFUs.  Tying all of these components together are 32 load/store units used to move data in and out of memory, a common network bus for component intercommunication, a shared block of discrete data and instruction cache, a bank of dispatch units that issue instructions to the computational units, and a scheduler that runs the show.  Overall just an incredible piece of technological achievement.  It could be argued that the single SMX is more complex than an entire, multi-core, general purpose CPU like an Intel Sandy Bridge processor.  And get this… A GTX Titan has 14 of these SMX units on it’s board all sharing 6GB of incredibly fast RAM.  Let’s take a quick, sobering look, and what all of these specs add up to in real-world capabilities (straight from NVidia):

For anyone who is even slightly familiar with computing capabilities, those are really jaw dropping numbers.  288GB/sec of memory bandwidth?  I mean seriously?!  By comparison the also super impressive Sandy Bridge E on Intel x79 chipset gives you 50GB/s of bandwidth using quad-channel 64bit DDR3 running at 1600Mhz.  Now of course on a GTX Titan there are, once again, 14 super dense computing units sharing that memory bus all cranking along at 1Ghz under load yielding that staggering 187 billion texture per second fill rate.

By no means do I intend for this to be an NVidia love fest, nor do I consider myself a fan of anything other than the technology.  AMD/ATI has an equally impressive architecture with similarly staggering numbers with their Tahiti platform and also on the general computing side with Bulldozer.  The point isn’t individual modern architectures, but really how far all modern architectures have come!  And on that note, let’s travel back in time, harken back to the days of yore, wax nostalgic, turn the clock waaaaaaay back to 1998 and the veritable dawn of commodity consumer focused real-time 3D hardware.  I give you the legendary… 3DFX Voodoo 2 12MB!

So yeah.  And make no mistake, the simple architecture above, with its two “Texel unit” texture mapping ICs and its single “Pixel unit” pixel processor IC, was absolutely state of the art in 1998.  I remember connecting two 3DFX Voodoo 2 12MB cards together in SLI (“scan-line interleave”, not to be confused with NVidia’s “salable link interface”, 3DFX cards literally split the frame alternating scan-lines), hooking up the analog VGA daisy chain from my Matrox 2D video card and out to the 1024×768 NEC CRT and basking in the glory of the mighty Tomb Raider:

Actually, Tomb Raider 1 still looks pretty good!  So what were the specs of the original 1998 Voodoo 2?  The premium “SLI” configuration just 15 years ago?

In 15 years state of the art 3D has made a truly revolutionary leap.  The GTX Titan has so much more computational power than the original 3DFX Voodoo 2 that it is almost difficult to draw a reasonable comparison.  The increase is literally multiple thousands of times in pure computational power and hundreds of times the RAM footprint.  When you consider that the price has only increased by about 350% the $999 Titan almost seems reasonable! 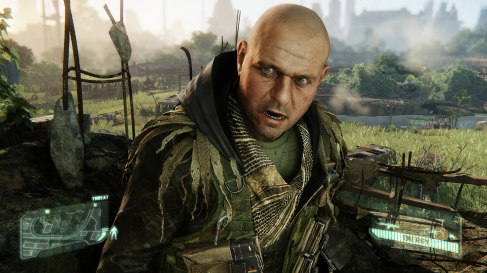