I recently decided to upgrade the ReadyNAS Ultra to make room for some new storage requirements.  The ReadyNAS remains a surprisingly powerful and flexible device so things went well overall, but there was some weirdness that is worth documenting in case others run into it as well and are wondering if it is normal or will cause issues.  To review, my current ReadyNAS Ultra is configured as follows:

For anyone not aware, X-RAID is a clever protection scheme which brings an added layer of flexibility while still providing standard RAID protection.  As a quick primer, the benefits are:

Some caveats to X-RAID are:

With all of the above in mind, I decided to move forward with the 2TB to 4TB scenario, replacing 2 of my Seagate disks with the new Hitachi HST efficiency series 5400 RPM 4TB disks.  Following the process as prescribed by Netgear went well.  I pulled one of the 2TB disks, swapped the 4TB into the carrier (this took longer than the required 10 seconds you need to wait before swapping back in) and then installed the 4TB disk into the array.  The Netgear immediately flipped to “unprotected” and “disk fault” upon removal of the 2TB disk and switched over to “resyncing array” about 5 minutes following installation of the 4TB disk.  The first resync took 26 hours.  This is on a 9.25TB usable array which was about 33% full.  After resync, I did a reboot just for good measure.

After reboot I repeated the procedure with the second disk.  This time the process took about 18 hours.  So things improved which is good!  Upon completion of this resync, the array status flipped back to “protected”, but each of the 4TB disks was only utilized at the 2TB level (1875GB usable).  This is because the 4TB disks were added into the 2TB layer as 2TB disks.   At this point, a reboot is required in order to get the array to actually resize.  Following this reboot, the status of the ReadyNAS switched to “array expansion” and the GUI started updating progress against the eventual target size.  This is where things got weird: 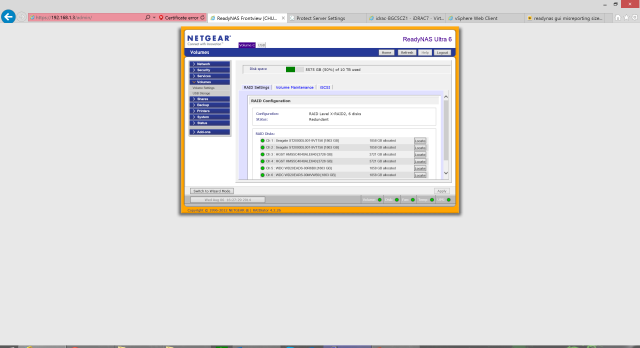 As you can see, the GUI was reporting that the new size would be 10TB usable – a mere 750GB up from the old array size of 9.25TB.  Some quick math shows that this is either incorrect, or something is wrong:

This is pretty far off from the flat 10TB being reported.  Binary/decimal translation aside (10TB vs 10TiB), we’re looking at over 1TB “missing”.  So what gives?  Well before panicing, I decided to have a look at the console.  Check out what a quick df in Linux reported:

Ah ha!  11,645,691,704 1K blocks so, in other words, 11.6TB!  Much better.  The good news is that as I copy about 5TB up to the array, df is, as expected, reporting spot on accurate usage whereas the GUI is staying very fuzzy and very wrong.  The conclusion?  Something is up with the GUI post expansion (and post reboot as I rebooted twice to attempt to remediate).

So some final notes:

This is where things stand so far.  As the situation develops or changes, I will update!