It goes without saying that when you need something done (and by “done” I mean bringing 85 megatons of melodrama to an almost completely ridiculous situation) you call in the big guns:

And when the “situation” happens to be an 1100 foot tall radioactive dinosaur that is indestructible and breathes lightning, well sometimes you even need to call in an assist just to make sure people realize that this shit is serious!

Woah.  That’s a lot of gravitas.  I think we all need a break here before we collapse under its intense weight! OK, that’s better.  What has these two titans of overstatement so rattled?  Well.  I think we all know.  There can be only one who inspires such dread in men!  Or can there?  Is there not another that shares the legendary namesake? Indeed there is.  One which requires an entirely different kind of talent to tame it!

All right all right, that’s enough of this.  I think we all see where this is going, no?  Last entry I hinted that there could be some additional instability in the ComplaintsHQ garage despite all promises, oaths and pledges to the contrary (all things begging to be broken, if we’re honest!).  For those just joining, allow me to catch you up.

In Japan there is a man named “Mizuno-san”.  He’s an insane genius who says things like “I wanted to build a supercar you could drive with your child, your wife, your lover” (true story).  Proof of his insanity is that, despite working for Nissan, he decided that it was time to topple Porsche off of their high horse.  The punchline is that somehow this madman did it.  Japanophile car nuts are no doubt fully aware of the Skyline GTR legend.  Most others, though, almost certainly are not.  One must understand that in Japan, there is a time honored tradition of taking crappy commuter cars (ok, ok… let’s call them “basic transportation”) and, through the application of dark automotive magic, making them “race car”.  That’s not to say they are entirely alone in this insane pursuit; Ford and Volkswagen in particular are also quite adept, but the Japanese seem to have an almost intrinsic cultural flare for it.  Always conservative and cautious in their approach to the US market, however, the Japanese are careful about how (and indeed if) they send these wonderful little beasts over.  The two most familiar faces on these shores are the technical tour d’force Mitsubishi Lancer Evolution (based on the tragic Lancer sedan) and the scrappy Subaru Impreza WRX STi (based on the quite good Impreza).  But there is, as they say, another.  Unbeknownst to most (and by “most” I mean basically only the US since bewilderingly everywhere else on Earth had access) Nissan was in this game too.  Outside of the US, Nissan built a basic sedan called the Skyline.  In its tamest form it was about as boring as possible.  Once they slapped that “GT-R” on the back though… Well… Then it became a thing indeed!  The Skyline GT-R powered through generation after generation looking a bit weird and challenging some of the greatest performance cars in history at a variety of tracks.  As its legend grew, and the US remained oddly frozen out of the fun, an actual grey market for the car (including in some cases conversion to left hand drive) formed.

In the mid 2000s, having embarked on his mad science project, and deciding we had had enough after some 25 odd years of denial (sounds like a marriage! bah dum bum!) Mizuno-san announced that the next generation GT-R would not only not be a Skyline, it would instead be purpose built from the ground up, but would be heading to the US!  It was, he crowed, going to humble the 911 Turbo (Turbo) at a pricepoint of $60k.  It would also solve world hunger and bring peace to the Middle East! (kidding about those two! although maybe…)  It should come as no surprise (especially given it has already been spoiled top of paragraph) that he actually made good on these boasts.  In 2008 the Nissan GTR (no hyphen) greeted the world to much fanfare, and also healthy skepticism.  Like the NSX more than a decade before, it rocked Europe to its core.  Six years on the GT-R has solidified its place in the automotive pantheon, continually pressing the 911 Turbo S (the S mind you!) to be better.  It has been dubbed by the faithfull Godzilla! (that’s what all the lead-in was about, if you were wondering)  And unlike the NSX, each year the car has been heavily evolved.  Heady stuff.  Of course in classic “bait and switch” fashion, the price has also skyrocketed.  That whole “$60k” bit lasted one year.  Today the cheapest GTR is $100k and the most expensive is $160k.  The “bargain supercar” is still a “bargain” compared to a Bugatti Veyron, but it’s actually catching up in sticker price with its arch rival from Stuttgart which is a bit odd since it’s a Nissan.

Keen readers will note that I am both a big fan, and prior owner, of the mighty Godzilla.  Mine was an 09 which really is a crude thing compared to the latest editions and is a good bit slower as well (“slow” being relative as the 09 is faster than most cars on the road).  Each year Nissan has not only tweaked endurance and performance, but also fit and finish, materials quality, ride comfort and a whole host of other things.  With each new GTR release my curiosity has grown stronger, but the cost of entry has kept pulling farther away.  This trend seemed unlikely to falter since Nissan both produces, and sells, hardly any of these things and there are generally enough buyers to grab them.  This year though, something went wrong.  Maybe the actuaries screwed up.  Maybe the market is soft.  Maybe the GTR is getting old.  Either way there are a lot of ’14s still hanging around (and “a lot” in GTR terms means a few hundred nationwide).  The dealers must have been grumbling because along came this: 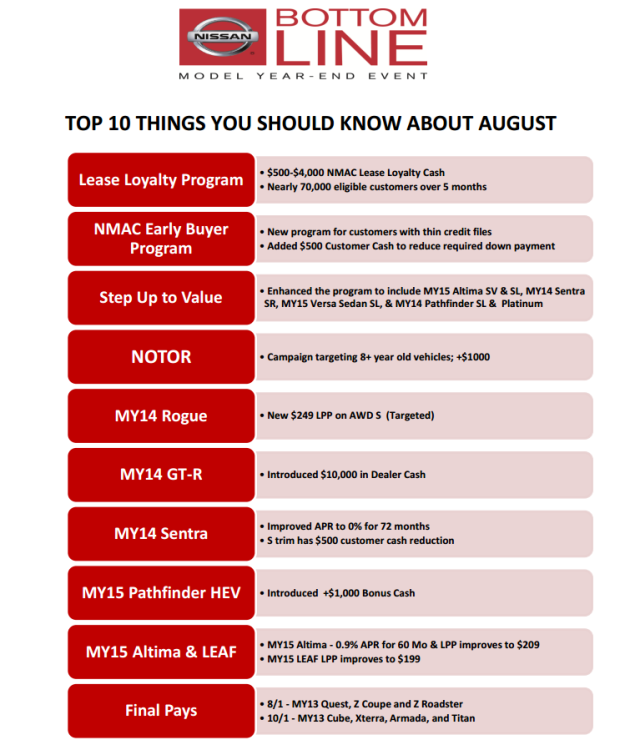 $10k is a lot.  On a car where the typical incentive is $0k it’s really a lot.  Of course Nissan did something odd and made this $10k to the dealer.  That means that until there is critical mass, they might not pass it on.  Every car they sold post this deal, without eating into the $10k, made them money.  Over time though, that critical mass was reached.  As of last month, there were about 100 2014 GTRs left in the US and dealers were getting aggressive.  Lack of demand for the car already leads to some decent deals (invoice is typical, cutting into hold back is possible)  Add $10k to that and you’re talking serious money off.  More importantly for me, though, taking upwards of $20k off of MSRP actually brings it in range of what I can consider pulling the trigger on (albeit agonizingly painfully!)  I decided that despite having a good German girl in the garage, I’d walk the path of the dirty dog and start sniffing around Japan again!

I had some criteria in mind in order to not feel like I was throwing good money after bad (I was going to be doing that, but no point feeling that way!)  Right off the bat a 2014 is a fantastic thing if your only experience was an 09.  The difference truly is dramatic.  New vs used is another amazing thing.  Luckily, these two criteria were built-in.  I decided that another Super Silver would not cut it and then, in a fit of irrational exuberance decided that a mere Premium wouldn’t cut it either!  Black Edition or bust! (hey, it’s only money right? yikes!)  The last criteria I set was that the car would have to be local.  I put this in as a “fate” test.  If it was meant to be then a car would turn up within driving distance (call it 100 miles).  If not, well then I’d be saving money and there’d be no monkey business!

This mission immediately required quite a lot of hunting, despite all of my restrictive criteria, and as is always the case, it seemed utterly impossible to replicate anything like the deals that people were, anecdotally, getting left and right according to the forums.  Perseverance can sometimes pay off though and right as I had given up, I discovered the good folks at Ramsey Nissan in NJ (shout out to Eddie, a wonderful GTR sales specialist)  Ramsey had not one, but two 2014 Black Editions in black.  I had narrowed color selection down to black or white, with white preferred but black acceptable, so black could work; especially since the nearest remaining white examples were in Virginia!  Car deals, particularly ones involving a trade, are like an epic war story where at any moment, a detente may be called.  Let’s cut to the chase and see how this one ends: 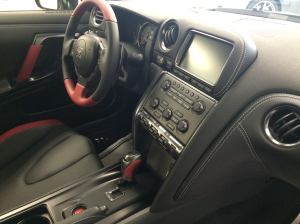 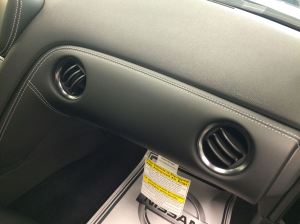 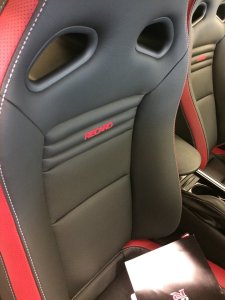 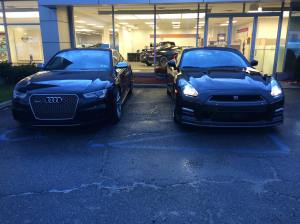 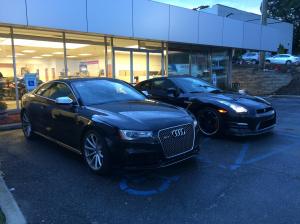 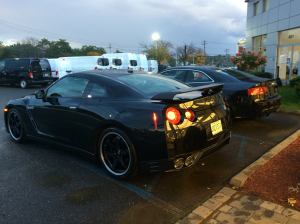 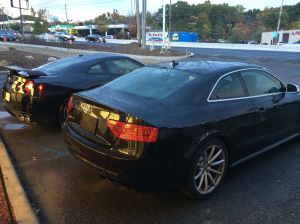