Two week business trips are brutal. Extending through a weekend is long enough to disorient, and it really is a lot of time away from the wife and kid. That said we all do what we must these days and, if you do have to be away for two weeks, there are certainly worse places than London! On this I disagree with Avi:

It’s been about a decade since I’d last visited the UK and, like New York, it is one of those cities that feels timeless. I’m sure a lot has changed, but the character of the place is eternal. Arriving in Heathrow and queuing up for entry is always daunting even for seasoned travelers, but luckily it was only thirty minutes or so until I was determined to be safe (ha! I fooled them!) and on my way. I decided to skip the rail, which I’ve heard great things about, and just take a cab since it was quite late and a two week bag that can accommodate suits is quite large. Seventy pounds later I had reached my new home:

The Radisson Blu Vanderbilt Edwardian (a place which could use a few more names), is one of those charming old establishments that, while currently bearing the name of a big chain, clearly has nothing to do with big chains. It was here before there was a Radisson and feels like it will be here long after they’re gone. One look at the lobby and I knew that there would be a community of would be ghost hunters insisting the place was haunted. A trip to Google proved my suspicion correct, but I can verify that in two weeks of coming and going at all hours I spied nary a zombie, ghost, ghoul, phantasm, poltergeist, werewolf or vampire. To be fair, with a seemingly endless maze of narrow hallways like this, you can’t really blame the paranormal society folks:

A work week is a work week and the first one passed with the usual collection of ups and downs. Before I knew it, the weekend had arrived. Even an ocean cannot protect you from “honey do” lists and so, with my tasks assigned, it was off to Harrods (yes Harrods… On the weekend… During Christmas season) to get them done. Being a reasonable fellow, lodging across the street from Gloucester station, I decided to take the tube. Isn’t it great looking?

My Facebook post which would later accompany this photo read something like this: “fuck me the London tube is ‘orrible. This is the calm before the storm. The storm, in this case, being a veritable flood of Saturday afternoon humanity that made the rush hour 7 train seem empty by comparison.” Or thereabouts. Suffice it to say that the tube gets damn crowded during peak times. And this is coming from a life long New Yorker! I survived the crowds though stepped into the somewhat fresh air, and was created with the lovely sight of one of the worlds finest stores:

Um… Yeah. Central London at Christmas time is like Babylon 5. I never really thought a city could get “full”, but this has to be close. Sprinkle in a dash of mad Arab billionaires driving brightly colored Ferrari 458’s and a dose of stone cold Eastern European gangsters in armored Rolls Royce’s, all violating every traffic law they can find, and I can say that being a central London cop must not be a particularly fun job! There is a happy ending though. I found the items I needed, managed to not suffocate or be trampled and got to see this guy: 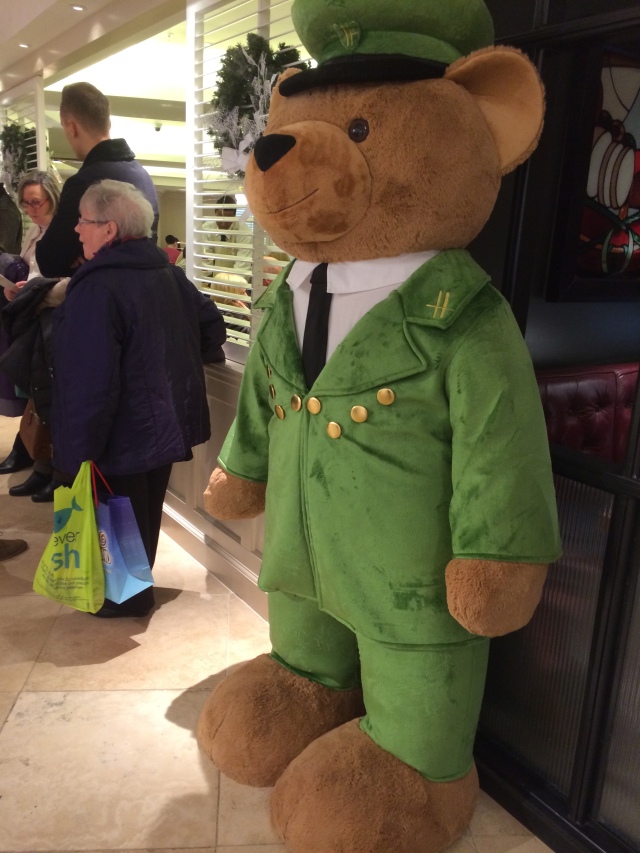 All I all London is a fantastic city. New York will always be my favorite, clear bias here, but London is surely a close second. Really a wonderful place to be even if it is for work!