I admit that being a hardcore PC enthusiast isn’t rational.  Its a passion and a hobby along the lines of car tuning.  Thats why so many seem to have more fun benching and discussing these beasts than using them.  Thats also why Mac fans often can’t “get” what drives the PC enthusiast scene – its really about the tinkering.

Still, it is sometimes nice to be able to demonstrate for rank and file average folks just why it is you have a computer that costs as much as a used car.  Like giving someone a ride around the block in a 911 Turbo, maybe they dont leave wanting one, but they sure notice a difference.  But the last few generations have seen somewhat diminishing returns in this area, unfortunately.  Moores Law is the problem here, ironically.  Hardware capability as of the Core 2 and the Phenom, and the NVidia and ATI DirectX 10 parts, really started to outstrip the workloads.  Or possibly more accurately, other bottlenecks became more of an issue.  The two biggest being storage and display.  So sure, the monster custom built PC or the $12,000 fully loaded Mac Pro are far beyond the neighbors run of the mill laptop, but showing off all of that computational power has become increasingly difficult because of those pesky bottlenecks.

To understand what becomes a bottleneck and why, it is important to analyze the workloads that high computers tackle.  Generally, most people can get away with a simple notebook computer for the vast majority of their needs.  This again, is thanks to the somewhat recent, and dramatic, increases in hardware capability.  Even the mobile parts are just more than fast enough for what the majority of people do – even streaming HD video is more network bandwidth limited than platform limited in anything better than a netbook (and even in that category ION does pretty well).  A few areas, though, have an infinite thirst for power.  The two most relevant ones for power users are content authoring (audio/video editing, really high end photo work, etc) and gaming.  It is interesting that the former is really more storage performance limited and the latter is really more display limited.  The reasons of course are obvious. Content work required continual access of bulk storage.  Large source files simply don’t fit in main memory and the work done on them when authoring is iterative.  Games, conversely, need to load the bulk of their data into memory upfront.  Because games occur in real time by definition, they simply can not be architected in such a way that leaves them dependent on bulk storage.  In addition, data must be loaded in chunks that can be digested by the local GPUs RAM, or bank of shared system RAM, so the GPU can operate on it.  So games, while of course benefiting from fast SSD load times, aren’t really bottlenecked by disk performance, but instead as GPU performance skyrocketed, they bumped into an even more interesting bottleneck at the very high end: screen resolution.   For anyone that has a long history in computing, it is heady stuff to have reached the day when the physical screen resolution simply isnt high enough to tax the GPU!

The storage question, initially somewhat mitigated by high performing RAID setups and now improved greatly by SSD, has gone a long way towards addressing the challenge faced by slow disk speeds when authoring content.  As a result, both the high end PC, and Mac Pro, worlds have seen amazing jumps forward in terms of the kind of work you can do at home if you are willing to spend a few thousand on a computer.  This is stuff that is beyond what an SGI Onyx was able to do (orders of magnitude beyond) just 12 years ago.   A really fast CPU paired with a big pile of RAM and a fast SSD or super fast SSD RAID can once again drop jaws rendering video.

The display question was trickier.  Monitors are only get so big and a single display resolution only gets so high.  Once 2560×1600 isn’t a big problem, and this has been the case through a few generations of high end NVidia and ATI parts now, where else can you go?  And perhaps more importantly, how common is a 30″ display at that res really?  For most folks, 24″ panels at 1920×1200 were about all that was practical from a cost standpoint.  At that res, even mid range parts don’t break a sweat.

As someone who has been building absolute top of the line gaming rigs for years now, this has been bugging me since the 8800GTX era.  Sure you can crank AA/AF through the roof, but it gets silly.  It didn’t stop me from pushing my systems forward, because it really is about the tinkering (much like with cars where 99% of folks arent lapping the Nurburgring), but it was definitely taking some of the wind out of my sails.  So it was with some interest that I kept my eye on the advances in multi-display setups.

Initially I resisted mainly because I liked my nice 24″ display (a PVA Gateway model), and I couldnt fit three of them on my desk, but the advent of 3D changed everything.  Here was a technology that seemed to be bringing even powerful machines to their knees and required new monitors.  Well I resisted for all of about 3 months before finally taking the plunge a few weeks ago.

I have to say that, cutting right to the point, this rig has completely re-juvinated my interest in PC gaming.  Here again are the days when people take a look at my “crazy setup” and see a workload and use case that is *truly* unique and, if not justifies, at least explains the reason for such a huge pile of hardware.

The effect is a mixed bag depending on game, but World of Warcraft (one of my favorites) is simply stunning.  Running around Azeroth in 3D surround has to be experienced really.  It may not be for everyone, but if it *is* for you, it is *very* hard to tear yourself away.

Make no mistake… This is high end stuff.  Even a 980x at 4GHz with 3 overclocked GTX480s on an SSD RAID system and a PCI-E X-Fi handling audio doesnt breeze through this workload.  But thats part of what its all about for the true PC enthusiast.  We never really *need* a reason to tinker, but man is it invigorating when we have one!  Highly recommended for the truly insane. 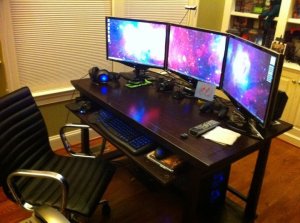 Added bonus… Some footage of WoW in action on the beast: