Every once in a while I like to ponder this question.  Love them or hate them, there is no question that Microsoft has a massively diverse ecosystem of products.  And while they’ve clearly slipped in mobile and possibly even general personal computing mindshare, their catalog of assets remains extremely powerful.  With Windows 9 looming, and unlikely to deliver anything truly revolutionary, it seemed appropriate to do this type of entry. You know the kind… It’s the “CEO for a day” fantasy.  So what should Microsoft do in order to recapture some of that magic which they have undoubtedly lost?  In a word (or two) – true synergy.

Synergy is one of those words that got over used by management consultants and, as a result, became a cliché and so is now met with exasperation anytime it slips into the discourse.  Make no mistake though, there is actually a such thing as synergy and in this discussion, it is very much relevant. Synergy simply means when two things come together and the result is something more than the sum of their parts.  So with that in mind, let’s consider the current state of technology for a moment.  Three key trends have become entrenched over the past 6 years or so and are now delivering on their potential to provide synergistic value (there it is again!) through convergence (another good buzz word!):

Why have I wasted all of this space rambling about trends?  Well I think it is important to recognize that the above is the reality of our current environment.  This is a fact that, while it was absolutely recognized, took far too long to actually influence Microsoft’s behavior.  In other words even as Microsoft was “talking the talk”, they weren’t “walking the walk”.  Today with Windows Phone 8.1, Windows 8.1, Xbox and their cloud offerings (Azure, Office 365, Xbox Live) they’ve started walking.  Slowly to be sure, but definitely walking.  This brings us back to that word “synergy” again.  Let’s take a look at some of the synergy Microsoft has gotten right today:

So it looks like Microsoft, alongside Google and Apple, has been making at least some moves to create ecosystem value through services synergy.  I believe, though, that they are leaving a ton of opportunity on the table.  If you really think about what the end user ultimately values, it’s for the technology to become transparent.  Consumers want to do whatever they need to do, when they are ready to do it, using whatever device they happen to have with them.  They also want the experience to adapt to whatever form factor that might be.  In addition, as they upgrade to newer equipment, they don’t want to leave anything behind.  Now if you think about it, what consumers are really looking for is the type of experience Corporate IT has been providing for years now.  This is particularly ironic in that consumerization and the cloud have been killers for core IT and are creating an “adapt or die” era.  In this case, though, the consumer technology industry can learn a lot from IT.  And Microsoft, as quite possibly the single most powerful enterprise computing vendor when you consider the breadth and impact of their portfolio, should be uniquely position to deliver here.  What does this mean?  A picture to illustrate: 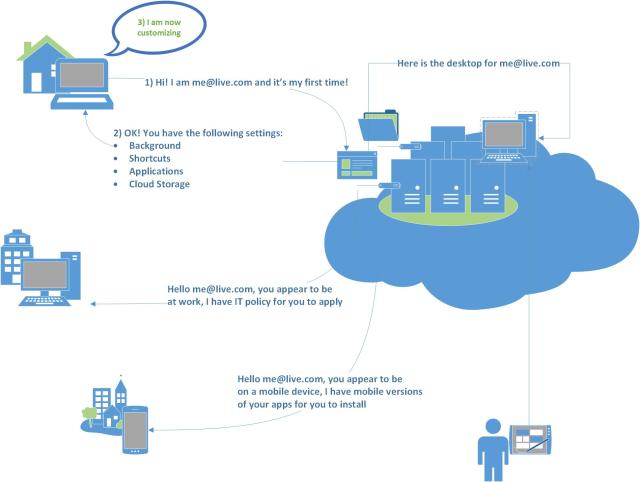 What the heck is this about?  In a nutshell, the above represents an extension of Microsoft’s profile synchronization strategy to all of their assets including full applications.  If you consider the Microsoft portfolio, it isn’t so far fetched:

How would all of this actually work and what should Microsoft be considering for a future OS?  Let’s examine what the user experience would look like:

With the new PC configured, me@live.com is off to the races.  What happens, though, if they login on a device that they also bring to work?

So far so good, but what happens if they login from their mobile?

Lastly, how does VDI fit in?

Summarizing, what the above vision represents can fairly be called real synergy.  It would also go a long way towards creating a safer “evergreen” environment since applications could be patched centrally.  In addition, development of this type of agility embedded in the operating systems themselves would help an already overburdened core IT bridge the consumerization gap and possibly even adapt new technology faster.

How close will Microsoft get to this?  In Windows 9 I suspect not very.  Down the road, however, I think if they don’t it is quite likely that Apple (or maybe even more likely Google) will.

One thought on “What Should Microsoft Do?”